From DOBE to BEDO

Last week, I heard a statement, actually a mission, of a ministry; “Helping Christians act like Christians,” while I was driving, I almost wrecked my car. Suddenly, I had images of Tom Cruise jumping over motorcycles and putting on masks.  Talk about Mission Impossible!

Yet, our minds are often so focused on DO that this represents the way we think. And this is what placed me on a bridge one night ready to jump as I considered the fact that I might never be able to DO again. An award-winning artist, my whole life had been defined by being able to do DO. Dozens depended on my ability to perform for their livelihood and the ability to feed their families. Leader among men in my church, who was known for his ability to help Christians act like Christians.

Till I was struck with a crippling disease, left with an uncertain future, wondering why God was mad at me, feeling like I was going to let dozens and my church down, entering a world of silence with doctors predicting I may never be able to walk without some sort of aid, much less DO again! As I stood on that bridge there were five prominent thoughts in my mind;

My dear friend Henry said it best recently. “The devil is a gambler, he gambled on the jump. Grace won that night.”

I didn’t have the answers that night and the pain of not knowing the answers to those questions was as painful as the physical pain I was feeling. Yet, looking back it was not the bright lights that hit me in the face from the emergency road crew that night that kept me from jumping but God’s loving sovereignty. It was God’s loving sovereignty as he broke my self-righteousness, my idea of obedience, my self-sufficiency and my idea of what a Christian should be to instill a different message, a message of grace.

The gospel without the law is not true …

What follows is the heart of that message.  The beginning point of that message is helping others to grow in the knowledge of Christ (2 Peter 3:18, Philippians 1:9), which comes through the gospel. It is not that the gospel is Christ, but that gospel speaks of Christ. The gospel without the law is not true and leaves the hearer unable to express in his life that which they have discovered through the gospel.

Yet, the law without the gospel is nothing more than a powerless to-do list unable to accomplish anything but make one weary from living life. I know firsthand about being weary from trying to enough to be right in the eyes of other Christians and God. I was famous for my to-do lists, after all.

The law without the gospel is nothing more than a powerless to-do list.

I had grown up with a Christianity that was all about DO. That night on the bridge, thousands of hours of study and what is now fourteen years later brought a different message.

I learned that there is grace found in both the gospel and law. Imagine a society where there is no law, we have all seen the effects of a lawless life. However, the law must always remain that which describes God’s character and that which describes how God always perfectly acts. Impossible to do or live perfectly (I sure tried hard enough, my family has the scars from me attempting to do so.), shouting always at us that we are not enough, nor will we ever able be on our own.

We don’t have to be enough because ABBA Father is enough.

As it does so it points us to a gospel that tells us we don’t have to be enough because ABBA Father is enough. Jesus made us enough. Yet without the law shouting at us, we may be tempted to rely on that which is most natural to us. It is indeed natural to us to want to be right, to find sufficiency and rightness in ourselves, only a law that screams failure at us can break us of such a natural bent to find significance or reason to matter in what we do, rather than what Christ did. This is why many will answer that the reason why they are significant is that they are obedient, repentant and walk right lives.

Never realizing that only by trusting in a law that no longer represents God, His character or His actions can they lay claim to such a hopeless plight. Those who ignore the voice of the law screaming failure at them, so they run to the gospel, ultimately imprison themselves on the hamster wheel of trying to be enough. As they run harder and harder to be more or prove themselves enough within their own abilities. Only to discover as John Paul Getty once remarked when asked how much money is enough, “just a little more.”

They may pretend that the law is not screaming at them or they do not hear the law laughing at them running on the hamster wheel, they may even state such, as they remain caught up on the hamster wheel of performance and perfectionism. Yet as the law screams louder to the falsity of such claims, they run faster as they remain unwilling to walk into the light with one’s failures, weaknesses and sins (1 John 1) with both God and man, hindering the fellowship of both.

In order to bolster their natural bent to a form of self-righteousness, towards a rightness, the idol of sufficiency, striving to be enough they are attracted like flies to those grace messages that do not call them to face their weakness or their failures, but such messages forget important truths. Truths that remind us that there are two parts to the equation of “His grace is sufficient for my weakness (2 Corinthians 12:9).” The first part everyone seems to understand, but the second part of knowing one’s weakness is often forgotten. Along with forgetting that real grace is only given to those who have heard the voice of the law that they are not enough, nor will the most uprightness, the most right person, the most together of us ever be enough alone ( Psalm 138:6; Proverbs 3:34; Proverbs 29:23; Matthew 23:12; Luke 1:52; James 4:6; 1 Peter 5:5).

Yet, to such messages, they run like moths to light not realizing that such light may, in fact, endanger them.  This is evidenced by this statement regarding society as a whole.

Bolstering, maintaining, and protecting self-esteem is the sacred cow of modern society. It’s a grievous evil to do anything that might cause others to feel bad about themselves or their performance.

Those who long ago downgraded the voice of the law in such a way that it only appears to give them instructions on how to run better on the hamster wheel of life hunger and thirst, long to hear more of the words that tell them how to perform better, do more, be more pleasing and more worthy. Give me instructions on how to improve, how to do better, then I can surely hold on to the hope that I’m improving. Tell me what to do their ego screams as it clamors for that which it falsely believes makes them significant, makes them enough, makes them matter.

Of course, it is not their ego they think they hear, but simply directions on how to be enough to prove themselves worthy and pleasing, they will say. 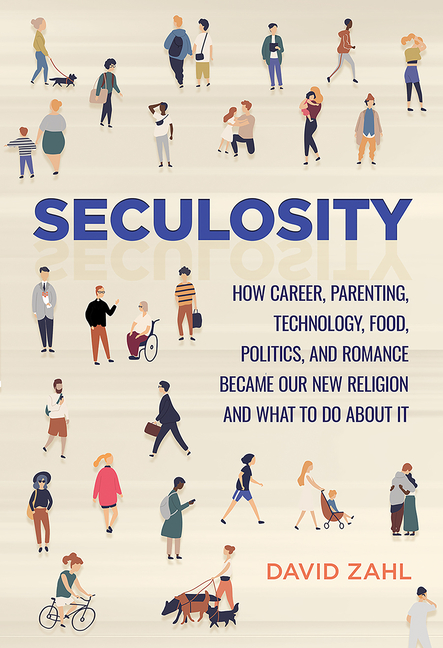 The longing for some form of righteousness is not an aberration perpetrated by capital-R Religion but a foundation of what it means to be human. — Seculosity: How Career, Parenting, Technology, Food, Politics, and Romance Became Our New Religion and What to Do about It — David Zahl

Never realizing that such behavioral, morality-based teaching only keeps hidden the real bread, real water that will quench their hunger and thirst to be enough, to matter, to be counted significant. Forgetting that real rightness comes not from within themselves, but outside of them.

This is why one must hear the bark of the law as it robs one of all hope in improvement of oneself to be enough in order that one rests in knowing that because one gave the ultimate performance, they now are enough. When our answer to the question of “Why Are We Significant’” shifts from; being about what we are doing, what others believe about us, doing enough to matter, being obedient enough, working hard enough,  making all the right calls, being seen as right or having it all together to

Because God has declared us His song of glory, The praise of His grace, The Crown Jewels, The reflection of the Trinity and The beloved of the Son.

We fully come to understand that when Christ said, “It is finished,” he was telling us we could stop working to be enough, accepting that we already are. Here is where we discover  the beauty that we no longer have to find within ourselves the ability to be right or enough in order to have a sense of our own righteousness but accept that we have Christs. It is because we fail to act on these truths, we remain stuck on DO.

When Christ said, “It is finished,” he was telling us we could stop working to be enough.

This is the battle, the war that rages in us, why Paul said, “sin showed him he coveted,” why Paul struggled to find within himself the ability, why we long to hear those to do messages, why we focus so hard on being right, winning being seen as enough and wind up stuck on the hamster wheel running for just a little more to indeed prove we are enough. When we accept that in Christ we are deeply loved (Colossians 3: and are enough our affections are moved Godward.)

Then the law reveals the true grace contained within it as it enables us to love the one who loves us first back and love others outdoing them in love and giving them greater honor. As our minds are transformed, we move from finding hope within ourselves to be right to ask, “How do I express that which I now am.  Thus essentially moving from DOBE to BEDO.  They realize that Colossians 1:10 is not an instruction on how to do more, but because they are more exhibit that they believe they are,

Those who know me now will often say it seems Pat has one message. It is a message that begins with helping others go deeper in the gospel to discover a God who is neither mad at them nor asking them to apply to be the latest spiritual performer but One who loves deeply. That springs forth from a passion to ensure that others know what I did not that night on the bridge.

We will only rest on the righteousness of Christ when we stop trying to have our own!
Click to Tweet

This site uses Akismet to reduce spam. Learn how your comment data is processed.